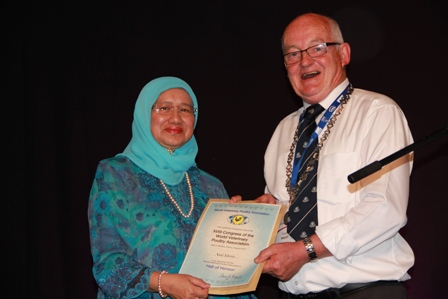 SERDANG, 15 Oct  (UPM)  - A Universiti Putra Malaysia (UPM) Professor of Avian Medicine has been inducted into the Hall of Honour of the World Veterinary Poultry Association (WVPA) that links veterinary poultry scientists around the world.

Professor Datin Paduka Dr. Aini Ideris was formally elected by the WVPA Executive Body to become an inaugural member of the Hall of Honour.

The WVPA has been in existence for 54 years and just 52 individuals worldwide had been chosen for the singular award.

Prof Aini, who is the Deputy Vice Chancellor of UPM (Academic and International) was formally inducted by WVPA President, Dr. Trevor J. Bagust, on 22nd August 2013, during the WVPA Congress in Nantes, France.

“Membership of the WVPA Hall of Honour is for poultry veterinarians/poultry veterinary scientists whose contribution to WVPA and the world of poultry health management is recognised as exceptional by their peers,” said Dr Bagust in his letter to Prof Aini on her election to the hall of fame last March. 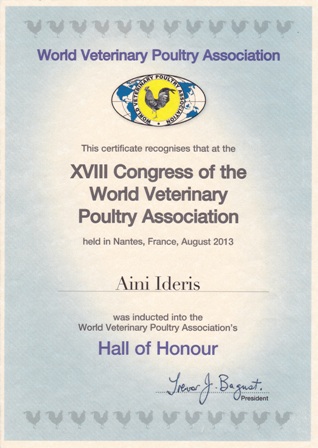 “it is intended that admission to WVPA’s Hall of Honour will be the highest badge of honour for any avian veterinary scientist, past, present or in the future,” he said.

The WVPA Hall of Honour was also inaugurated in digital format at the Nantes Congress and can be accessed at www.wvpa.net or http://www.positiveaction.info.

In her academic career spanning almost 35 years at UPM, Prof. Aini’s research interest has been in avian respiratory and immunosuppressive diseases related to the control of poultry diseases, development of poultry vaccines and diagnostics.

Her findings had led to the commercialisation of Newcastle disease and fowl pox vaccines in 1995 and 1996, respectively.

In 2005, her research team (Prof. Aini as co-researcher), successfully commercialised another important poultry vaccine against the infectious bursal disease.

All these vaccines are now sold in many countries.

They are currently looking into the development of halal vaccines, utilising different carriers in the bioreactor.

Born and raised in Kelantan, Prof Aini graduated with Doctor of Veterinary Medicine (DVM) degree from UPM in 1979 where she started her career as a tutor.

She continued with her post-doctoral training at the University of California, Davis, USA from 1990 to 1992 and at Cornell University in 1993 under the Asian Development Bank Fellowship, where she was involved in molecular pathogenesis research. 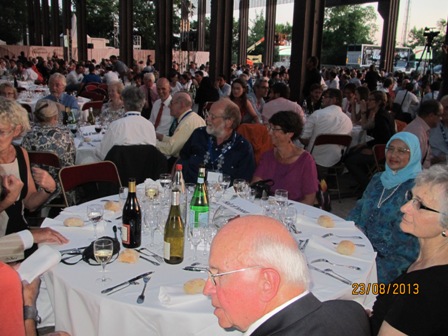 She is also a member of Board of Governance for International Medical University (IMU), and Putra Business School. 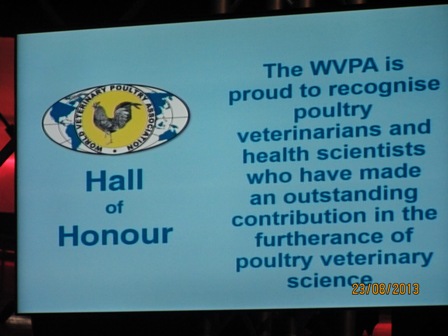 In her illustrious career, Prof Aini had received national and international awards such as the prestigious National Academia Award (AAN) 2010 for her successful innovation and commercialisation of Newcastle disease vaccine (ND V4-UPM).  The AAN is the highest achievement award conferred to Malaysian academics.

She is married to Dr. Md Ishak Ismail and they have 5 children (four boys and a girl). All the boys who are engineers by training are married, while the youngest, daughter Nurliyana is presently pursuing her Master in Engineering at The University of Nottingham.

They have 4 grandchildren, 3 boys and a girl. – UPM