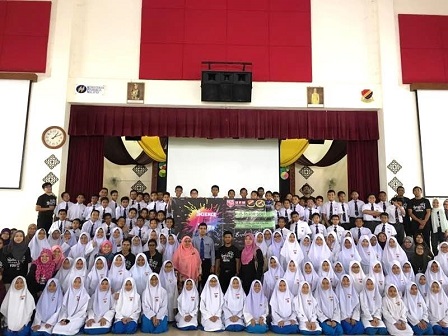 JITRA – The recently-organized Science For Youth 2017 under Kursus Bakti Siswa by Universiti Putra Malaysia’s Co-curriculum and Student Development Centre has helped to inculcate interest in science among participating students through exposure on scientific theories and applications in everyday life.

The programme at Sekolah Menengah Sultan Abdul Halim (SMSAH), Jitra, Kedah, was  conducted by Group 55 of Kursus Bakti Siswa, comprising 33 students of Bachelor of Science (Hons) in Chemistry Major whose roles were as programme enablers and facilitators.

The programme was participated by 120 Form One SMSAH students under the supervision of Dr Norizah Abd Rahman, with the cooperation of UPM’s Science Faculty and SMSAH Alumni.

Science demonstrations related to Pure Science topics taught in Form Four were carried out to enable students to do simple experiments so that they could learn both the practical aspect and theory, too.

Through the programme, students were able to improve on their soft skills such as moral ethics, communication skills, leadership, entrepreneurship and teamwork while facilitators gained useful experience in serving rural communities.

Dr Norizah said interest in science and mathematics should be enhanced to prepare students to face the modern era of high technology.

SMSAH student, Mohd Zulhilmi Azhar said he was pleased to have been selected as a participant as he managed to learn new things and acquire new knowledge from the programme.

"In the past, I often adopted the memorization concept for all the subjects but actually there are many kinds of new concepts that we can make use of like quick multiplications and how to solve scientific problems by analyzing all the possible effects and so on," he said.

Programme Facilitator, Nur Syahirah Razali was pleased that she was picked to be involved in the programme as she was able to guide students on science-related matters, saying that it was important for students to learn and master knowledge on science since Form One.

Another programme facilitator, Mohd Eizlan Shah Mohd Faizal, meanwhile, said through the programme, he was able to share his knowledge and help Form One students to adapt themselves to life in hostel and school because it was the first time that they were away from their parents.

SMSAH Senior Assistant Teacher 1,  Mansor Abdul said it was hoped that such a programme could be carried out in the near future as students had gained positive impacts that were useful for their studies as well as their lives. – UPM.