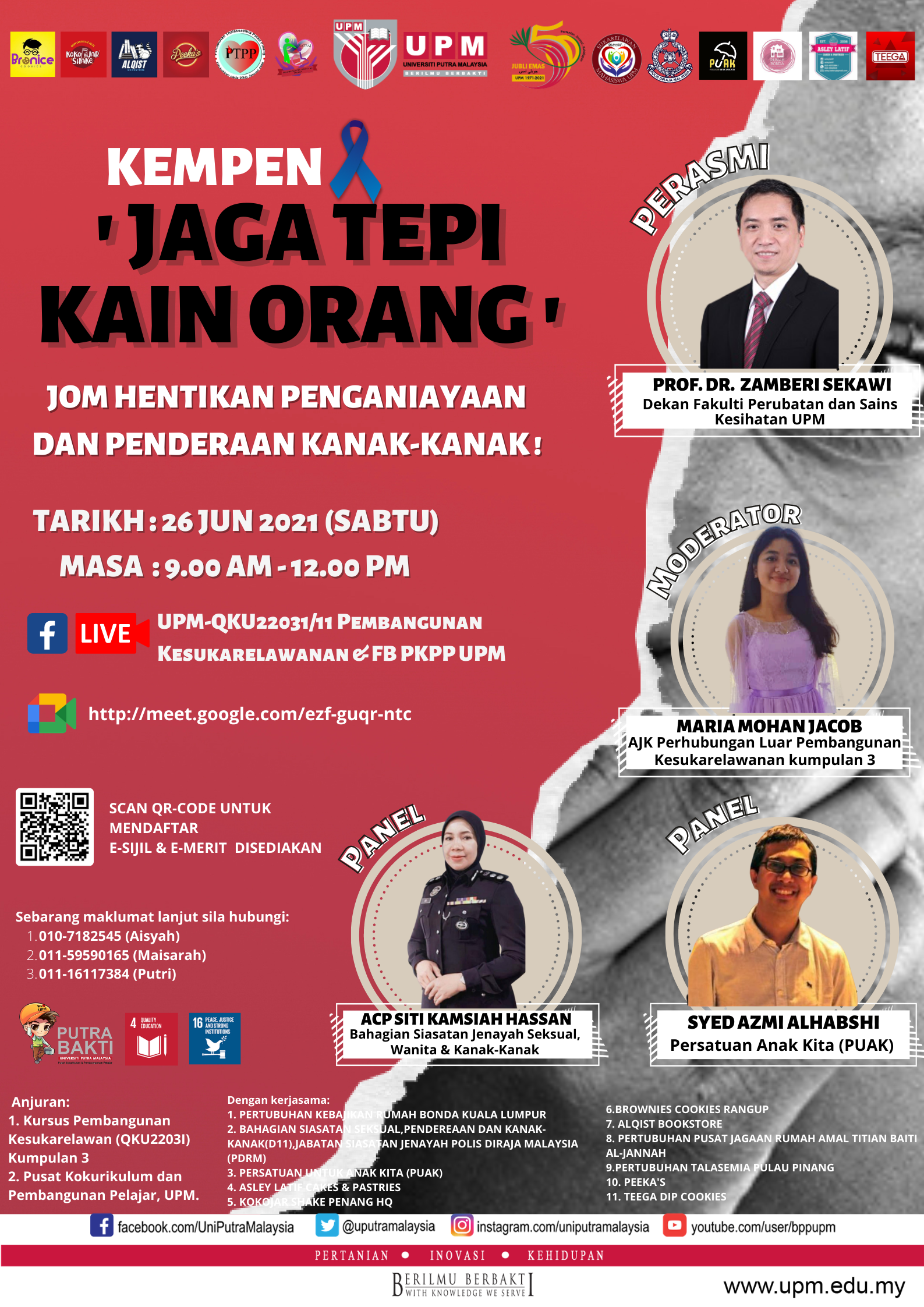 SERDANG, June 26 – Since the Movement Control Order (MCO), we often hear news of children being abused, and the media has also been reporting various forms of child abuse cases involving beating, kicking, raping, and even to the extent of losing lives.

Such actions are like cancer to the abusers to release their anger and lust.

According to the campaign forum ‘Jaga Tepi Kain Orang: Jom Hentikan Penganiayaan dan Penderaan Kanak-Kanak!’ (Let’s Stop Child Abuse and Neglect!) held recently, there has been an increase of about 20 per cent in child abuse and neglect cases since the MCO.

The campaign aimed to provide a more meaningful life for children who often become punching bags and victims of lust. These children should be given an opportunity to live a normal life and feel protected in society.

It also aimed to provide exposure and awareness to the community on the issue of child abuse and neglect.

Dean of the Faculty of Medicine and Health Sciences, UPM, Prof. Dr. Zamberi Sekawi, said in his officiating speech that it was apt to provide awareness and knowledge to the community and show the role of higher education institutions in volunteering activities.

The E-Forum panel, Syed Azmi Alhabshi, said it was important for the community to have the knowledge and awareness to help the authorities deal with neglect and child abuse cases.

According to him, about 3,000 cases of abuse are reported every year, and 70 per cent of the abusers are those close to the victims.

“What is recorded in the statistics are case reports recorded, and 50 per cent of the reports show that children are abused by their own parents and caregivers. Imagine how many cases are not reported to the authorities.

“The action of neighbours or people around who choose to remain silent is also among the causes of increasing cases of child abuse,” he said.

Principal Assistant Director of the Sexual, Woman, and Child Investigations Division (D11), Bukit Aman, ACP Siti Kamsiah Hassan, said the community needs to step up and be determined to ensure the safety and lives of children. This should be our mutual responsibility as children are our next generation.

“It is important that we don’t back down because it is our responsibility to look after the well-being of children. Children have the right to live and grow up as useful human beings,” she said.

She said the community should not be afraid to lodge a police report if they have solid evidence regarding child abuse cases because the PDRM protects the privacy of the person who lodges the report. – UPM