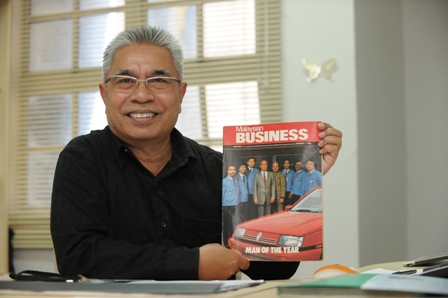 SERDANG, 18 July  (UPM) – Most people would know the Proton Saga that dominated the Malaysian roads in the 1980s and 1990s but few would remember the man who designed that iconic Malaysian-made car till late last month.

If they do remember, then it is probably because the Proton designer, Haji Mohd Azali Abd. Rahim, 63, was  honoured by his peers in the industrial designing industry with an award, the “Tokoh Ideation – Pereka 2013”.

That  honour, the Ideation - Pereka Personality 2013 award, was created only this year by the Persatuan Pereka Perindustrian Malaysia (Pereka) and it was aptly given to Hj Azali, a pioneer who had studied in ‘industrial design’ when few people knew what it entailed.

He is now a special lecturer (pensyarah khas) in Universiti Putra Malaysia (UPM) where he is providing a balance to the academic instructions and where he is passing on his skills to the younger generations. 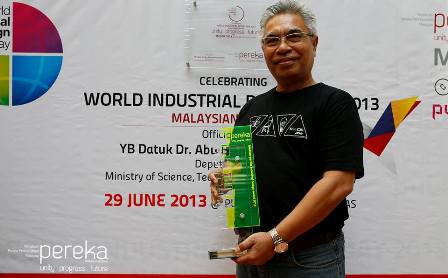 With his rich experience and network in the industry, he is also playing a key role in assisting the research university in commercializing their products and other research works.

Hj Azali said he was humbled by the award which was introduced by Pereka for its World Industrial Design Day (WIDD) celebration on 29 June, 2013 and which was given to him for his various pioneering contributions in academic institutions and industries.

The association had organized the event at the shopping mall Publika in Solaris Dutamas, with unique design exhibitions of product prototyping and design development  processes, apart from talks in a public area daily from 18-29 June , to let the people know the full scope of what ‘industrial design’ is all about. 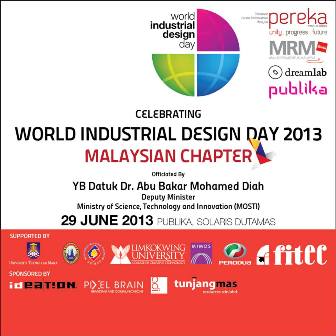 Pereka has more than 500 members who come from different working areas of industrial designing like furniture, car accessories, packaging and tools.

The highlight of the WIDD celebration was the Tokoh Ideation award and Hj Azali  received it from the hands of the Deputy Minister of Science, Technology and Industry (MOSTI), Datuk Dr Abu Bakar Mohamed Diah.

Hj. Azali, who is council member of the Malaysian Design Council (Majlis Rekabentuk Malaysia) under MOSTI, said the event at Publika drew a lot of interest from the visitors, unlike the days when he first enrolled to study industrial design.

“When I enrolled for the course at Institute Technology Mara (or ITM as it was known then) in 1969, nobody knew what industrial design was all about.

“I had to check it and found that it was the art of creating products (art + science), and since I am excellent in art and fond of science, I went for it!” he said.

As a boy born and bred in Kota Baharu, he had his early education at Sultan Ismail College before joining ITM where he was among the pioneering batch of students to obtain a diploma in industrial design.

From there, he went through the irksome process of submitting his work to gain admission for a degree course at Manchester Polytechnique (now known as Manchester Metropolitan) where he graduated with a Master degree in Industrial Design Engineering. 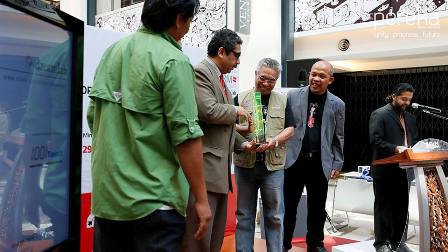 Upon his return from UK, he became a lecturer and then a senior lecturer at ITM (now known as UiTM or University Technology Mara) before joining Hicom and being assigned to design the first Malaysian national car or the 1st Proton Saga models.

When Perusahaan Otomobil National Sdn. Bhd (Proton) was official founded on 7 May 1983 he was appointed as the head of R & D Department. He also had a hand in growing the local vendors to manufacture and supply the parts and components for the Malaysian-made Proton cars.

Guilt over not spending enough time with his wife when she was diagnosed with kidney failure, made him quit his job so that he could devote his time and care to her.

When she passed away , Hj Azali answered a summon by Tun Dr Mahathir Mohamed in1994 to initiate the design of the 1st National Commercial Vehicle and to take lead in setting up the R & D Department for Inokom (Industri Otomotif Komersial), a joint-venture project between a Malaysian company and Hyundai.

He was invited by UPM to become its adjunct professor before. Currently he is on contract as a special lecturer in the Department of Industrial Design, Faculty of Design and Architecture.

Hj Azali who has 5 children and three grandchildren is happy to have the chance to teach and pass on his skills to the younger generation at the university.

“I introduced the Rapid Prototyping (RP) medium to produce the actual models for the final year projects. The outcome was so impressive, that even the students were amazed with their creativities and technical capabilities!” he said.  – UPM