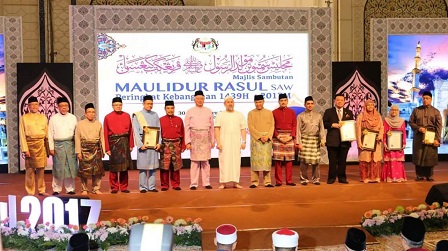 KUALA LUMPUR, 30 Nov – A Universiti Putra Malaysia’s (UPM) professor, Prof. Dr. Taufiq Yap Yun Hin, was one of the eight recipients of the awards presented in conjunction with the National-level Maulidur Rasul Celebration for the year 1439 Hijrah that was held at the Federal Territory Mosque, recently.

Prof. Taufiq, also the President of the Malaysian Chinese Muslim Association (MACMA), received the award for his active contribution in nurturing the prosperity and well-being of Islam as well as his roles in the field of research and tertiary education.

Prof. Taufiq  who is also the Head of the Catalysis Science and Technology Research Centre UPM, received RM20,000, a trophy and a certificate.

Award recipients were chosen based on the recognition they have earned from various parties due to the contribution made in uplifting Islamic teaching at the national and global level.