﻿﻿ Prof Emeritus Who Is An Icon Of UPM, Donates More Books To The University | Universiti Putra Malaysia 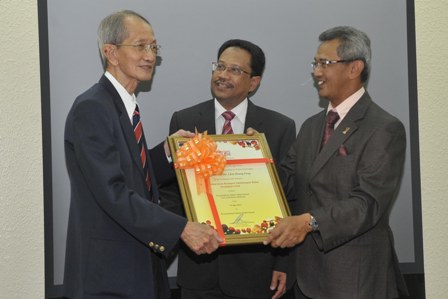 SERDANG, 5 April (UPM) - At a ripe age of 78, Professor Emeritus Dr Chin Hoong Fong should be basking around the home in the warm of his family, like any other grandfather, but he chooses to continue working and writing more books.

And this icon of Universiti Putra Malaysia (UPM) who is said to have taught and trained seven 'generations" of  UPM graduates chose to donate his latest book to his alma mater in a brief ceremony here today 19 March 2013.

With this latest donation, Prof Chin has given the UPM library a total of 1,360 books including the 13 written or edited by him, prompting UPM Vice Chancellor Prof Datuk Dr Mohd Fauzi Ramlan to say that he agreed with the proposal to regard Prof Chin as an icon of book donation of UPM.

Noting that Prof Chin had donated his own personal book collections to UPM in 1993 and 2013, he said the book donations were invaluable to the university.

"To Prof Chin on behalf of the university, from the bottom of my heart, I would like to thank you for the noble effort and contribution to the university and mankind as a whole," he said when officiating the book donation ceremony at UPM Library.

Earlier in his welcoming remarks, UPM Librarian Amir Hussain Md Ishak said it would not be an exaggeration if he were to describe Prof Chin as an icon of book donation in UPM who should be emulated. 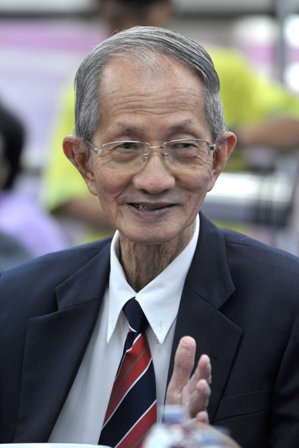 He also informed the gathering that Prof Chin’s co-editor, Prof M.N. Normah, is the Director of the Biology Systems Institute of Universiti Kebangsaan Malaysia (UKM) who is an alumnus of UPM. She is also a former Ph.D student of Prof Chin.

Prof Chin who was born in Kuala Lumpur in 1935 started schooling at a late age of 11 at the Methodist Boys School after World War II.

He left KL in mid 1955 to do his matriculation at the University High School in Melbourne before he graduated with a Bachelor of Agricultural Science from the University of Melbourne in 1960.

In 1961, he started work as a lecturer at UPM, a job he had never applied for, yet he accepted it without hesitation and since then he has never looked back and continued for the rest of his career. On his own he studied for his Masters degree in Agricultural Science externally and graduated in 1971 from the same Australian university.

In his speech, Prof Chin told the gathering that unlike his contemporaries who were going for the more glamorous profession of law, medicine and the like, he opted for agriculture because of his passion for the subject he likes most.

In all, he had taught and trained just over 10,000 graduates in agriculture over a span of  a 53-year career teaching in UPM, the one and only place where he worked all his life.