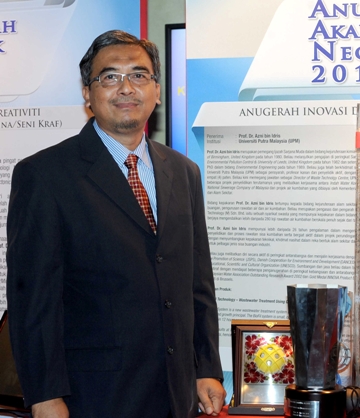 SERDANG- A researcher from Universiti Putra Malaysia (UPM), developed a river and water treatment system called the BioFil system, comprising the use of ‘cosmoball’ in natural water treatment process without adding chemical substances.

"This innovation is made from special plastic in order to allow microorganisms grow on the surface to reduce organic pollution in the water.

“The treatment with biofilm on ‘cosmoball’ is used to allow polluted water to go through ‘fixed bed’ which contains microbe-bearing ‘cosmoball’," said the lecturer from the Department of Chemical and Environmental Engineering.

According to Azni, after several hours, the microbes will consume the waste complex around the ‘cosmoball’ and convert the rest of the complex into carbon dioxide and water.

The idea surfaced when he found that most of water treatment processes using chemical treatments were expensive and caused side effects such as toxic wastes.

He is confident that if biological treatment is used, the water treatment process will be safer, cheaper and capable of being used by major industries in Malaysia such as industrial manufacturing, food, sewage sector and river treatment projects.

"This water treatment is more effective than the existing treatments because it can be produced in a short period of time and requires little air for aeration.

"This treatment also requires a small land area and it is very effective for ammonia nitrogen removal," he said.

Through his efforts, this innovation has been commercialised by Physician Management Technology (M) Sdn Bhd. in 2012, after forging a pact in a memorandum of agreement (MoA) with UPM Innovations Sdn. Bhd and came out with the patent number MY 127825A for anaerobic version.

He said the cost of innovation is estimated to be worth RM8 million if it is developed for urban sewage, RM3 million for factory while the cost for a river treatment plant can reach as much as RM20 million.

"Currently, there is another new product being developed as a result from a continued development of biopolymer to complement ‘cosmoball’ and BioFil system to get rid of turbidity and color in the water.

"This product contains Aflok, which is 100 percent natural material. This product has been out in the market and received very good response from manufacturers.

"Another innovation that will be commercialised is a useful biochar microwave process that is able to convert sludge waste into charcoal," said the winner of the National Academic Awards 2013 for the Best Innovation and Product Commercialisation category.