﻿﻿ Oils, Fats Innovation: Use Of Nanotechnology In Cosmetics And Pharmaceuticals | Universiti Putra Malaysia 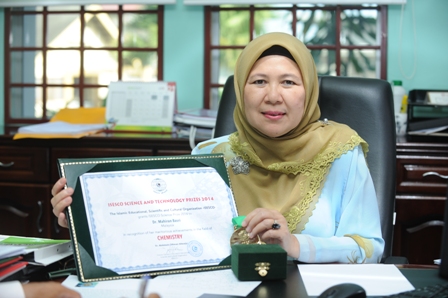 SERDANG: The use of oils and fats has been successfully diversified, resulting in an innovation formulated through nanotechnology that is beneficial to pharmaceutical and cosmetics industries.

A Faculty of Science, Universiti Putra Malaysia (UPM) lecturer, Professor Dr Mahiran Basri, not only succeeded in producing new useful substances made of oils and fats for the industry, but also managed to produce them through environmental-friendly ways.

"This organic synthesis uses enzymes and it is produced through nanotechnology. Our focus is to process new substances derived from oils and fats," she said in an interview at her office.

In the field of cosmetics, for instance, she said there are antioxidants and anti-aging substances, through the use of nanotechnology, those substances can easily absorb through the skin.

This way, they would be more effective, she added.

"What is also important is that the materials are clean and safe," said the winner of the Islamic Educational Scientific and Cultural Organization (ISESCO) for Science and Technology 2014 award, which was held in Rabat, Morocco, in December.

The recognition was based on her active research and excellent performance in the field of chemistry including her far-reaching oil palm research that has contributed to the pharmaceutical and cosmetics industries. The award was presented by the ISESCO Director General, Dr Abdulaziz Othman Altwaijri as Prof Mahiran took home a certificate, a medal and a cash prize of USD$5,000.

The biennial award has been organised by the Organisation of the Islamic Conference (OIC) since 1979 to foster and strengthen collaboration in the fields of science, education and culture among the OIC members.

According to Mahiran, efforts have been formulated to commercialise the innovation although it may take time.

"At this stage, we have obtained a pre-commercial project from Malaysian Technology Development Corporation (MTDC)," she said.

Professor Mahiran said in pharmaceuticals, an innovation has successfully produced a drugs delivery method to penetrate the ‘blood brain barrier’, especially for diseases that are associated with the brain, such as Alzheimer, Parkinson, epilepsy and meningitis.

"Drugs are normally hard to reach beyond the 'blood brain barrier'. Thus we created drugs through nanotechnology, and that way we hope they are more effective," she said.

She added, the innovation has been tested on animals and there were visible positive effects.

Meanwhile, in the agro-chemcial field, Professor Mahiran said, the formulation was made in a nano form to kill weeds and also perform as a cleaning agent to the environment, thus improve the development of the agricultural industry.

"The ingredients in the cosmetic, pharmaceutical and agro-chemical formulations are made through nanotechnology to produce the best for their efficacy, bio-availability in the products and ensure the safety of the consumers" she affirmed.

Professor Dr Mahiran has led 20 research projects in more than 3 decades since 1982, with provisions of grants worth more than RM7 million.