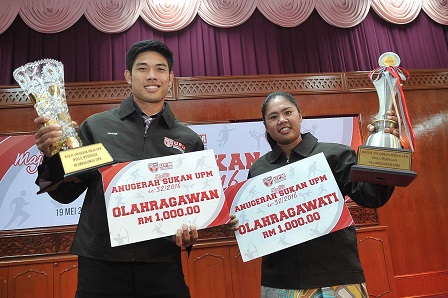 Each received RM1,000 cash plus a jacket, a trophy, a watch and a certificate presented by UPM Deputy Vice-Chancellor (Student Affairs and Alumni), Prof. Datuk Dr. Mohammad Shatar Sabran.

Muhammad Hakimi, 25, a Bachelor of Education (Physical Education) student from the Faculty of Engineering, is national and SEA Games record holder. He expressed hope to improve his jump by as far as nine centimeters longer than his personal record of 16.76 meter.

He will undergo training and participate in three tournaments in Almaty, Kazakhstan during the month of Ramadan to achieve his personal mission to qualify for the Olympic Games in Brazil in August.

Sarita who is a Bachelor of Science in Human Development student from the Faculty of Human Ecology, meanwhile, expressed hope that she could bring home a medal from the World University Championships in 2016 in Mongolia which will take place from June 1 to June 5. 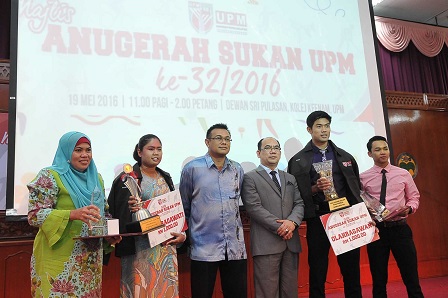 The Promising Sportsman Award went to Bachelor of Communication student of the Faculty of Modern Language and Communication, Mohamad Lutfi Othman, who is also an athletic shooter while the Promising Sportswoman award was won by Bachelor of Business Administration student from the Faculty of Economics and Management, Raden Nur Najwa Arifah Raden Dzulfakar of Tenpin Bowling.

Also launched at the ceremony was the Manual Book on Work Procedures for Sports Centre which was developed by UPM Sports Centre in early 2016, containing the work procedures of the centre in carrying out its responsibility as Pusat Tanggungjawab (PTJ) in managing sports events for university students and staff.