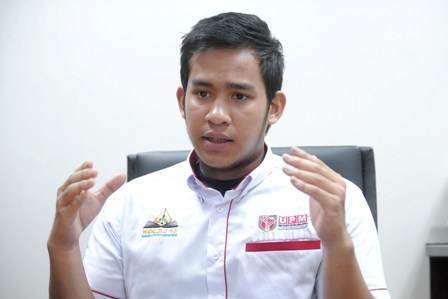 Adamantly sticking to that expression, Muhammad Hanif, 21, vowed to serve his fellow students despite facing time constraints due to his focus on academic and association activities.

"The concept of knowledge, serving is what I hold on to firmly in performing and carrying out the mandate as the MPP President. The motto keeps me going. It gives me the shivers just to talk about it.

"An important key in doing something is sincerity, which has always become my principle," he said in an interview recently. 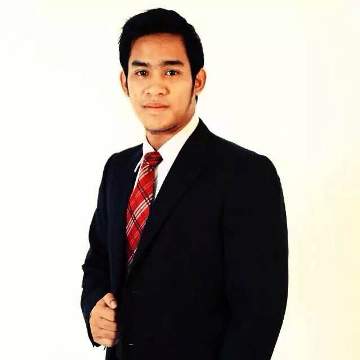 He described holding the post as the MPP Vice President in the 2013/2014 session, as his "trial period" and has since, determined to whole-heartedly continue assisting the students.

Today, he stood to do just that with the mandate given as the MPP President.

Hence, not long after being entrusted with the responsibility, he revamped the MPP, to make it a better organisation.

"Now the organisation is more structured and well-linked with the 45 newly-elected exco members including the presidents of faculties, colleges, associations and clubs, and it has also created a stronger bond through the formation of a solid team," said the youngest of four siblings who hailed from Pengkalan Hulu, Perak.

He said all the theory learned as well as through observation and experience obtained during his visit within the country and overseas, have been translated into services offered to the students.

Not only that, during his tenure as the 13th College president, he, along with other committee members managed to organise a programme at FELDA Mengkuang, Pahang which was also the college’s 'foster family', besides another programme at Kampung Kinasaraban, Kundasang, Sabah where coincidentally a house was ablaze and had caused its occupants homeless.

"We were trying to help. After receiving a hug of thanks and smiles, satisfaction set in... weariness suddenly disappeared," he said. 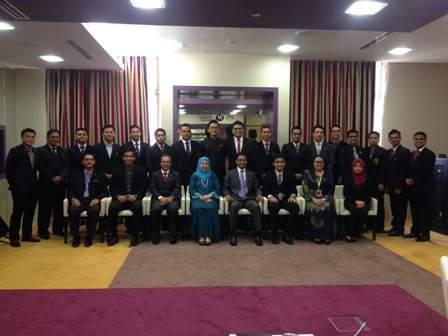 Recalling his schooldays, Muhammad Hanif said he had never become a school prefect either in secondary or even primary school, and only became the class monitor when he was in form three and in Matriculation College, Malacca.

Admitting that he used to wallow himself with disciplinary problems and a little 'mischievous’ when studying in Sekolah Menengah Kebangsaan Kubang Bemban, Pasir Mas, Kelantan, he said his annual examination results were bad and he was placed in the eighth out of nine classes.

However, his persistence in doing revisions, proved to be fruitful when scoring 8A’s in the Penilaian Menengah Rendah (PMR) examination in 2008, which not only surprised his teachers and friends, but also himself. This is my burning passion in gaining knowledge. “The picture of the 127 students from our school who scored 8A’s was featured on the front page of a newspaper."

"Alas, showing my PMR result to my father was to no avail," he added.

He had to rush back from Kelantan to his family home in Port Dickson to visit his father, who was at that time receiving treatment in the Intensive Care Unit at the Port Dickson Hospital.

"Nevertheless, I was satisfied because I managed to cheer him up with my PMR result before his passing," he said.

Never been actively involved in any association in school, Muhammad Hanif said, the situation however, turned after he became a UPM student.

He said, Rakan Muda Secretariat Exploration Camp 2013 in Ulu Serting, Negeri Sembilan, had broadened his mind and taught him to think further. He was then selected to participate in the Rakan Muda Gunung Tahan Volunteers programme, elected as the UPM Rakan Muda Sector Publicity Committee Member, picked to take part in the Forestry Camp at Air Hitam Forest Reserve, Puchong where he was conferred the Best Forester, and appointed as the college’s Supreme Council member for Students Sport and Recreation.