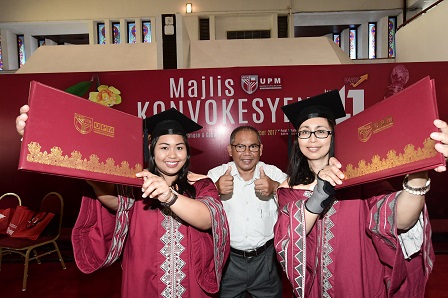 SERDANG, 7 Nov - Age and responsibility as a housewife did not prevent a mother from studying and learning in the same class as her son until each of them successfully obtained a master's degree.

Both of them, Mazlifah Khwaja Kamaluddin, 56, and her son, Aiman ​​Nabillah Zulkafli, 27, captured the historic moment and shared their joy when each of them received a Master of Corporate Communications at Universiti Putra Malaysia’s (UPM) 41st Convocation ceremony.

Mazlifah Khwaja started her studies in early 2015 while Aiman ​​Nabillah began his in early 2016; however, he managed to complete his studies at the same time as his mother.

Mazlifah Khwaja said that at the beginning, she felt a bit awkward studying at an older age and pursued the same programme of study with her son. However, after a while, it turned out to be fun.

"It's not easy to study at an older age. The hardest thing for me was to remember and memorise what I had learned; I had to repeat it over and over again," said the mother of four from Serdang.

She added that she and her husband, Zuilkafli Bakar, 56, also had to divide their time to care for their youngest son, Anuar Ridwan, 16, who had autism.

Mazlifah Khwaja, a former civil servant and had worked in the private sector before her retirement, said that her interest to study in the field of communication was a result of her realisation that the field was important and could be applied in everyday life and in all kinds of jobs.

Aiman ​​Nabillah added that he enjoyed learning in the same class with his mother in the final semester and received their master's degrees at the same convocation ceremony. - UPM