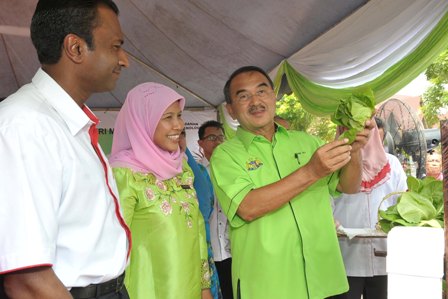 AYER KEROH, 4 April (UPM) – Universiti Putra Malaysia (UPM) can introduce urban agriculture in Melaka as the state could implement it as a new agricultural alternative for a sustainable township that can generate its own produce.

“Urban agriculture involves producing, processing and selling the agriculture produce, using spaces available in the urban areas like the outskirts of the city, residences and buildings,” he said at the opening of UPM’s Agriculture Specialist Clinic Programme held in conjunction with Melaka State Agro Biotechnology Open Day here today.

Urban agriculture in a building could be likened to a manufacturing plant, where it produced vegetables and other food, he said.

He also wished to see that UPM’s experts collaborating with the Malacca Municipal Council to landscape the banks of Melaka River in order to attract tourists, especially those taking the Melaka River cruise.

“UPM also organized Agricultural Clinic Programme aimed at providing training for technology transfer, knowledge and industrial training for agriculture entrepreneurs in areas like plantation, livestocks, aquaculture and agro-based industry as part of the efforts to increase food production and generate income,” he said.

The clinic would be manned UPM’s experts in the fields of food plantation, horticulture and farming, aquaculture, urban agriculture, fertilizers and soil fertilization, agriculture entrepreneurship, food technology and processing as well as halal certification.

The Dean of UPM’s Faculty of Agriculture, Prof Dr Abdul Shukor Juraimi, who was also present said, the Melaka chief minister wanted UPM to join hands and utilize the empty spaces at the Melaka Foundation Building for urban agriculture. 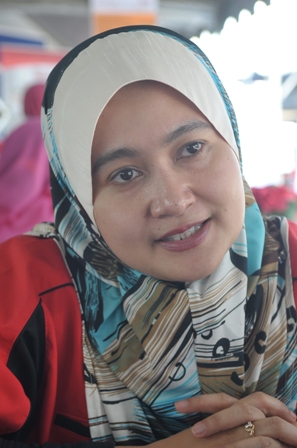 After a preliminary meeting with the state officials on 5 April 2013, a follow-up meeting was held on 9 April 2013 with a group of UPM’s specialists, including those from the Faculty of Design and Architecture.

He said he had also received numerous enquiries from the visitors on the relevant tools and equipment needed for urban agriculture, what were the right plants to grow and so on.

Prof Dr Shukor said the cost for “pisciponics” (or an integrated vegetable planting and fish breeding) was approximately RM500 and the vertical model or the layered ones cost about RM900. The cost of this equipment could be lower when ordered in bulk.

He also said that bamboo could be used to make these apparatus as they have the technology to make the bamboo more hardy and durable.

Meanwhile, a visitor, Abu Hasan Ab. Aziz, who was able to get some advice on his cattle livestock, said the agriculture clinic had given him the opportunity for open consultations.

“I hope that UPM will continue to conduct this programme, especially in the rural area of Melaka so that the residents could benefit from the direct communication with the experts,” he said.

Dr. Nitty Hirawaty Kamarulzaman, a lecturer with the Faculty of Agriculture said the programme offered free consultation on agriculture and livestock breeders.

“We have the technology and information which can be channelled to the rural people concerned and I hope that the programme would be carried out from time to time in Melaka but also the other states,” she added.  -- upm