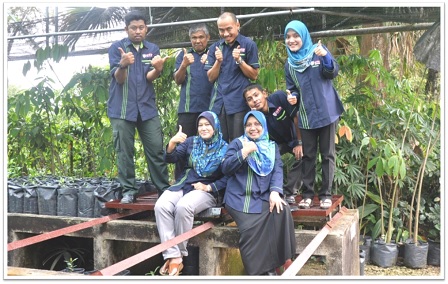 SERDANG, Nov 18 - The creativity to innovate to increase productivity and save time has sparked the idea of producing a tool to facilitate the transfer of saplings in polybags at nursery plots.

The device known as Plant Mobiliser-Flora (PM-FLORA) is created for use in shades for premature plants.

It facilitates the transfer of saplings between compartments based on suitability in terms of the required percentage of sunlight and age of the plants. 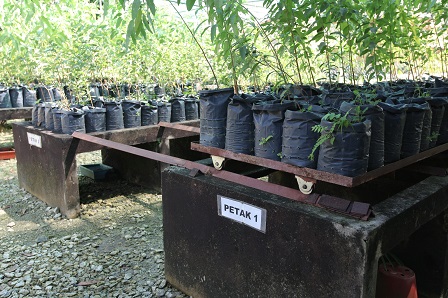 The innovation by Kumpulan FLORA comprising officers and staff of the Forestry Faculty of Universiti Putra Malaysia (UPM) has successfully shortened the transfer of seedlings in 400 polybags from 8 hours to a mere 10 minutes per session, and this can be done by just a single person.

In the past, the whole process of transferring 400 polybags of saplings from the faculty nursery using conventional method by way of lifting, took about 8 hours.

Forestry Faculty Senior Assistant Registrar, Mohd Sopian Mohd Zin who is also team facilitator, said the cost to develop PM-FLORA which involved the use of 10 trays was RM5,140 but the cost is redeemable within 2.8 months from savings as less manpower is required.

According to him, sapling polybags placed on the trays which are equipped with wheels would be pushed through a line of special steels that acted as rail routes for the wheels before the plants are transferred to the desired compartments based on the amount of sunlight required.

The equipment comes complete with six wheels, with each having the capacity of handling weight of up to 350 kilogramme.

PM-FLORA was invented in December 2014 after improvements were made to the earlier innovations - a plane trolley which was produced in August 2014, and later, a sliding tray.

He added that the transfer of sapling polybags to new spots at nurseries has to be done five times as the percentage of sunlight required varies, depending on the age of the seedlings.

Forestry Faculty Assistant Agriculture Officer, Mohd Shahrul Nizam Ahmad Sanusi who is also team leader, said the use of PM-FLORA helped reduced the needs for manpower although the quantity of saplings to be planted could be big.

“The device will not damage any saplings during the transfer…polybags will not tear while the roots will not get cut off,” he said.