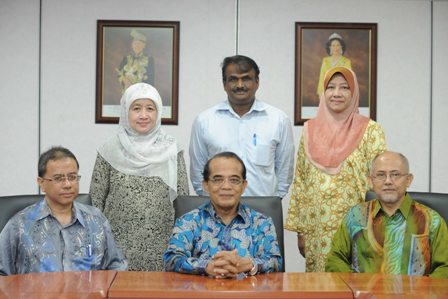 SERDANG, 18 June (UPM) –Contrary to common perception, the wizards of mathematics of Universiti Putra Malaysia (UPM) are not just dealing with calculations, equations and formulae  – they are counting and calculating their way to a level of international repute that should be a source of pride to the university.

Housed at the Institute of Mathematical Research (or INSPEM, Institut Penyelidikan Matematik), these mathematical scientists have just received the recognition of the European Mathematical Society (EMS) by way of its award as an “Emerging Regional Centre of Excellence.”

“We are very much looking for a fruitful collaboration with you,” said Marta Sanz-Sole, President of EMS to Prof Dato’ Kamel Ariffin bin Mohd Atan,  Director of INSPEM,  in a letter dated 26th May, 2014.

“On behalf of the Executive Committee may I congratulate you, and wish you every success,” said the head of EMS that is based at the Department of Mathematics and Statistics, University of Helsinki, Finland (http://www.euro-math-soc.eu/ ). 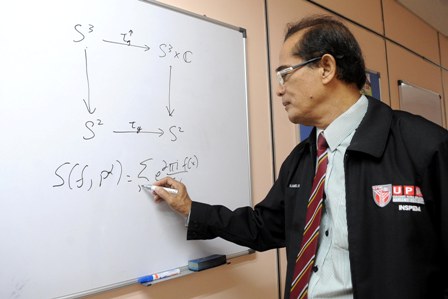 For Prof Kamel Ariffin, the award could have not come at a better time since INSPEM was launched on 1sr April 2002, as one of the nine research institutes of UPM with the dedicated task of spearheading and championing research in mathematical sciences.

To him and his staff at INSPEM, the EMS award is by far the most prestigious to INSPEM , and is a strong recognition and endorsement of their work, that they are headed in the right direction, so to speak.

And, it started in March this year when EMS sent Prof Michel Waldschmidt, a central committee member from France to INSPEM to evaluate the institute that has a staff strength of 35, comprising 28 permanent and 7 contract staff for its five divisions.

“EMS assessed us on our performance in research, post-graduate studies and quality of our researchers,” Prof Kamel Ariffin said in an interview that was also attended by his deputy and all the heads of the five divisions in INSPEM.

He said the EMS would now expect them to play a more visible role in the promotion of mathematics on the world stage.

“EMS would also be sponsoring PhD students, especially from countries that need their assistance, to INSPEM,” said the mathematician who had started his first job as an executive officer with Bank Negara after graduating from Universiti Malaya with a BA in mathematics in 1972. 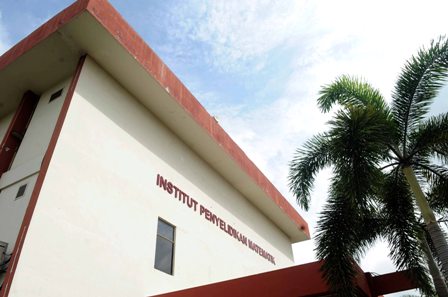 A product of the Malay College Kuala Kangsar, Prof Kamel Ariffin has an illustrious service in UPM where he had served as Deputy Vice Chancellor in charge of academic affairs and research before returning to his passion for mathematics as the director of INSPEM.

The network of international repute is further attested by the 105 visiting scientists appointed by INSPEM so far, not to mention the scores of prominent visitors like Prof Leon Takhtajan of the State University of New York, Prof Bob Coecke and Prof Artur Ekert of Oxford University, Prof John Baez of the University of California Riverside.

To date, more than 140 students had graduated from INSPEM with their PhD and MSc degrees while the current enrolment is 80 PhDs and 65 MSc. 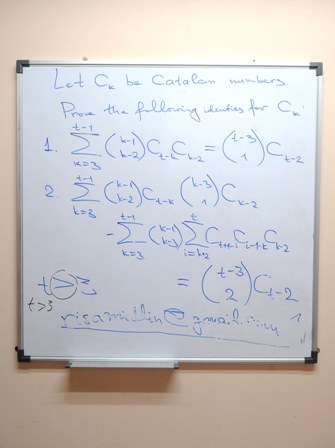 INSPEM is also the home to the secretariat of the Malaysian Society for Cryptology Research and the Malaysian Academy of Mathematical Scientists of which Prof Kamel Ariffin is the president.

Among the outsiders which seek INSPEM’s expertise are the Defence and Education Ministries, the former for the field of Cryptology that deals with coded or encrypted secret messages and the latter, for programmes and projects to motivate schoolchildren to  study mathematics.

“We have the leading researchers in Cryptology in the country,” said Prof Kamel Ariffin, of the science of coding messages based on mathematics.

The series of seminars, forums and conferences organised by INSPEM and its linkages and collaboration with their foreign colleagues have allowed them to keep abreast of the latest developments in their respective fields.

Afterall, the vision of INSPEM is “to become a renowned institute in mathematical sciences research contributing towards the development of progress and well-being of mankind.” – upm/kgo