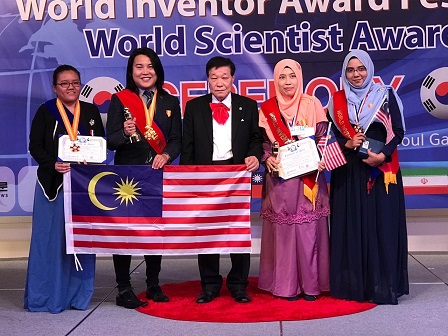 She bagged the award from her research which led to the creation of an innovative product in the field of science – Quantum Communication Simulator (QuCS) – which was subsequently commercialized.

She also won an 'Innovative Inventor Grand Award' for 'Order of Merit: Information Technology' at the 5th World Inventor Award Festival (WIAF) 2016 -  a show of recognition for her creative and innovative product, QuCS, which involved the transfer of technology.

In addition to winning the award, she was also appointed as a visiting professor by the Korea Invention Academy (KIA) and her appointment took effect from Dec 4, 2016. Her appointment as the visiting professor is a recognition for her excellent performance in academic, research and development, commercialization, intellectual property as well as international innovation.

Assoc. Prof. Dr Zuriati and her research partner who is a PhD student from UPM FSKTM, Roszelinda Khalid, also received a certificate, medal and a trophy at the event, presented by WIAF Commission Chairman of Korea Invention News (KINEWS), Soung-Mo Hong. 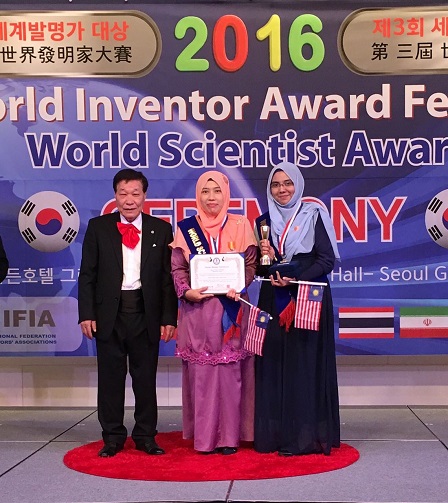 QuCS is an initiative to bring the community closer to Physical Sciences which forms the domain in computer science, in particular Quantum Communication, said to be difficult to be understood by everyone.

Assoc. Prof Dr Zuriati said her accomplishments were recognition for local research innovations that could bring significant impacts and benefits not only to Malaysia but also the international community.

"This recognition helps to pave the way for local goods to be in the international arena,” she said.

According KINEWS, the 'World Woman Science Grand Award' 'is the highest recognition accorded to women researchers worldwide, highlighting their innovative products and their significant impacts on economic growth, while the' 'Innovative Inventor Grand Award of the Order of Merit: Information Technology' 'is the highest recognition accorded to innovative inventors, thus opening up opportunities for the commercialization of their innovations. – UPM