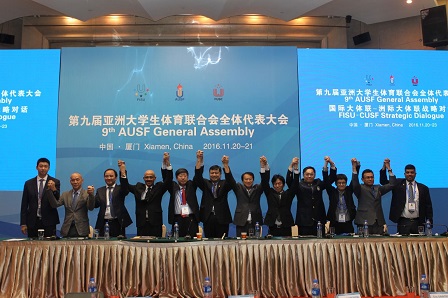 An event where the voting was held, involved 30 representatives who are members of the Asian University Sports Federation (AUSF) General Assembly, based on the eligibility of the nations.

Malaysia was represented by Dr. Hanafiah who garnered the highest votes – 25 – followed by Kazakhstan (22), Japan (21) and Nepal (19) for the position of “Assessors”.

Dr. Hanafiah’s nomination for the position of “Assessors” came from council members of the Malaysian University Sports Council (MASUM), comprising Directors of Sports Centre of institutions of higher learning in Malaysia.

Previously, Malaysia has never been listed as a member of the Asian University Executive Committee.

The Executive Committee meeting was held for the first time during AUSF held in Xiamen, China, which took place from last Nov 19 to 21. - UPM