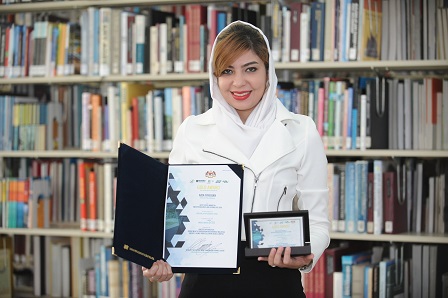 Dr. Aida, 30, from Kerman, Iran, who is doing a course on Water Resource Engineering, Civil Engineering Department of the Engineering Faculty, won the medal through her thesis, entitled “Optimizing of Hydropower Reservoir System Using Genetic Algorithm For Various Climatic Scenario”.

She walked away with a certificate, a plaque and cash of RM5,000 which were presented by Natural Resources and Environment Minister, Datuk Seri Dr. Wan Junaidi Tuanku Jaafar, at the national-level World Water Day held in Putrajaya last March.

Dr. Aida who completed her PhD studies in UPM in 2015, said her thesis was very much related to climate change which could result in water crisis and on ways to overcome the disaster as well as the need to build more power stations.

“In the future, several countries are expected to face severe water crisis which is caused either by lack of rain or increasing rainfalls,” she said in an interview at UPM here.

Therefore, for the next 30 years from now, something fast needed to be done to minimize the effects of climate change to human and earth, she said.


As for her success, she said she had never expected that her thesis which focused on the situation in Cameron Highlands, would be picked as the recipient for the gold award.

“I had gone back to Iran…my supervisor, Prof. Thamer Ahmed Mohammed Ali contacted me to inform that my thesis would be submitted for the contest.

“I came back to Malaysia on March 10 for holiday and not long after that, I received an email from the organizer, stating that I had won the gold award.

“I was shocked but at the same time, happy…I sent the email to Prof. Thamer and he replied, and later, he even called me to say that I had indeed won the Best Thesis award.”

The award, she said, served as a morale booster for her to continue working hard to achieve success in her career.

“I will be returning to Iran as I have secured a job in Kerman,” she added. - UPM