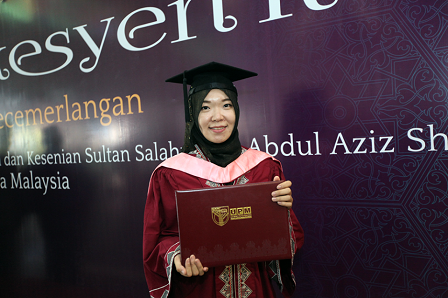 Wei Wei, 27, from the province of Tian Jin, quite near to Beijing, said determination and commitment saw her through the course that involved linguistic grammar.

“We just need to interact a lot with our friends, do revision and discussion…for me, the grammar in Arabic is quite tough.

“Nonetheless, it was fun to study the language…moreover, it is the language of the Quran,” she said when met here today.

Before pursuing her study in UPM in 2012, the only child of a Muslim family already had a diploma in Arabic Language which she took up in his country.

“I want to continue learning Arabic, that is why in my pursuit for higher education, I am still doing the same area of learning.

“I am now doing the Master’s degree on Arabic Language in UPM, right after finishing the Bachelor’s degree in Arabic,” she said.

She added that she learned the language to make it easier for her to secure a job once she is back in China.

“There are many job opportunities in China such as becoming a teacher or a translator and because there are so many Arabic tourists coming for their vacations to China, surely, employers need lots of interpreters!” she quipped.

According to her, both her parents strongly supported her in learning Arabic and furthering her study outside China.

“They wanted me to be more open and search for knowledge by interacting with as many Muslims and non-Muslims alike, in countries like Malaysia,” she added.

She said her parents who were overwhelmed with her success, however, did not attend her convocation this time around, but will come to Malaysia when she finished her Master’s degree. – UPM