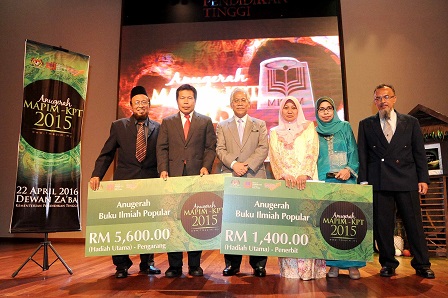 They walked away with a cheque of RM7,000, a certificate and trophy which were presented by Higher Education Minister, Datuk Seri Idris Jusoh here.

Writing of the tractate which formed a study commenced in January 2015 and it featured some notes on the Ryukyu Empire, also known as Okinawa, which proved the existence of Malay warrior, Hang Tuah, during the glorious era of the Malacca Sultanate.

In addition, the existence of Hang Tuah is further evidenced through Rekidai Hoan, a document classified as valid by scholars and the finding of archeology which proved diplomatic relations with the Malacca Empire.

The book will be put up for contest at the 2016 National Book Award and at present, the writers have begun writing their second book, Buku Hang Tuah: Catatan Vijaya Negara.

Datuk Seri Idris said MAPIM-KPT 2015 Award presentation was a prestigious event at the national level, held in recognition of the works by writers, editors and authors who are members of the Malaysian Scholarly Publication Council (MAPIM).

“I really hope that MAPIM members will be more active in encouraging our academicians to produce scholarly publications based on their respective expertise and to be prepared for digital publication, that is e-Book,” he said. – UPM.