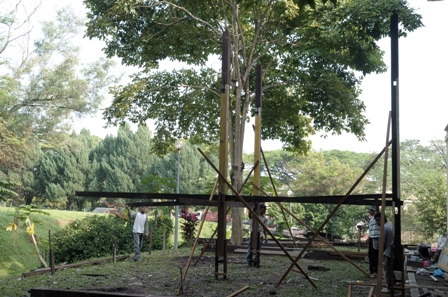 SERDANG, 14 March (UPM) – Unlike the rituals and ceremony that marked the start of the construction of the ancient house of a Negeri Sembilan royalty in the bygone days, a simple doa selamat prayer was all it took to re-build that house in Universiti Putra Malaysia here today.

The unique traditional house that had once served one of the Orang Empat Istana Seri Menanti was dismantled piece by piece before it is re-constructed in its new home in UPM where it will serve the new owners as a heritage museum.

The house was donated by Darwinshah Muhammad Yunus,  the successor of Datuk Raja Diwangsa, to UPM which is restoring  and transforming the wooden house into a Malay Heritage Museum.

UPM Malay Heritage Museum Director, Dr. Muhammad Pauzi Abd Latif said, the old rituals and prayers before the tiang seri or main pillar was raised or erected were meant to symbolically fill the house with positive energy or spirit for the welfare and safety of the inhabitants.

“According to ancient beliefs of the Negeri Sembilan natives, objects such as gold and silver would be placed beneath the pillars in order to beckon and add to the home’s glowing charm.

“When TokTonso’s house was first built, it also involved the placing of several
objects such as the 1935 silver coins at certain areas. Now, we used the new coins of 2013 to represent the year that this house is re-built, “said Dr. Pauzi.

Instead of the ancient rituals and ceremony when the main pillar of the house was erected next to Sanggar Bahasa, a simple doa selamat ceremony was officiated by  the Dean of Faculty of Modern Languages and Communication, Prof. Madya Dr. Abdul Mua’ti @ Zamri Ahmad, the man behind the idea of establishing the house as a heritage museum.

“In this modern era, we find it difficult to believe this kind of thing, nevertheless, that is the uniqueness of Malay old tradition, even building a house would entail philosophy and symbolism,” Dr Pauzi explained at the ceremony.

He also said there were distinct differences between the houses of the nobility and the ordinary people of Negeri Sembilan in term of size and design that would portray the status of the owners.

According to Dr.Pauzi, most of the nobility’s houses had five main areas, which were the corridor, verandah, main hall, the attic and kitchen as compared to only three in the ordinary houses.

“The uniqueness of Tebar Layar Mentari Terbit Pagi   is that it is a fixture positioned at the front part of the house facing sunrise. It was built that way to assist the homeowner to determine the right qiblah (Mecca-facing) position, which is also the prayer position.

“Another exclusivity is a place for corpse cleansing where it used to be a normal practice for the old Negeri Sembilan homeowners to manage the dead among family members,” he added.  -- UPM