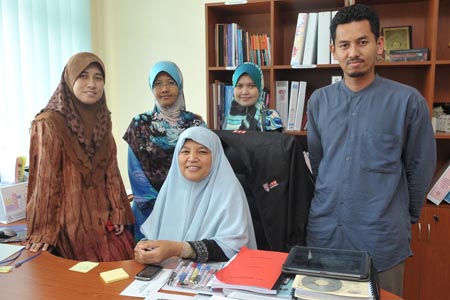 
SERDANG, 2 April (UPM) – A group of Universiti Putra Malaysia (UPM) lecturers and researchers are burning the mid-night oil not because of any exams but because they are racing against time to perfect their innovation of using the smartphone mobile device to verify a product’s halal status.

Hailing from the Faculty of Engineering, these scientists and researchers had a first taste of the vast possibilities of their work when their Android app development was among the five finalists shortlisted for the Celcom App Developer Challenge 2012.

Their work dubbed MyHalal App was among the 57 registered ideas and 22 apps submitted for the Celcom challenge which is a platform for mobile app developers to showcase and commercialise their innovations.

Led by Dr Wan Azizun Wan Adnan, the UPM team from the Computer and Communication Systems Department of the faculty designed and developed a software to be installed in Android- based mobile devices, like smartphones or tablets, which can be used as a scanner to scan the barcode of a product to verify of its halal status from a database. 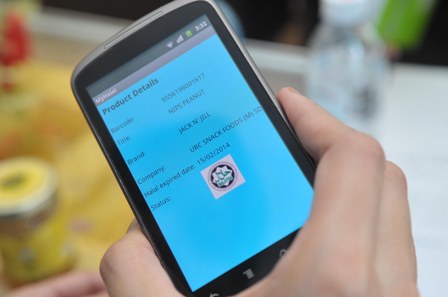 Additionally, information of the product, such as names of the manufacturers and its halal certificate expiry date, will also be shown.

Dr Wan Azizun said she was working on a related project when they chanced upon the idea of having a fast way of making sure the halal status of a product.

It took them about three months to come with the app for the Celcom competition from the time they first mooted the idea of using a smartphone to check if the product is listed halal as approved by JAKIM ( the Department  of Islamic Development Malaysia).

Team member Dr Shaiful said they found out that JAKIM has more than 100,000 products certified as halal in its record.

“So, our programmer used the barcodes of these products at JAKIM to transcribe and create a database that can be downloaded to any Android based smartphone or tablet that will allow for offline halal  verification anywhere, without the need for any external device,” he said.

For  minimal fees, the database can be downloaded to the  mobile devices and can be updated through the Internet as JAKIM builds up its record of products certified to be halal.

Dr Shaiful said while the halal logo could be unscrupulously used without the endorsement of JAKIM, the barcodes were like the “fingerprints” of the products which cannot be altered or fake. 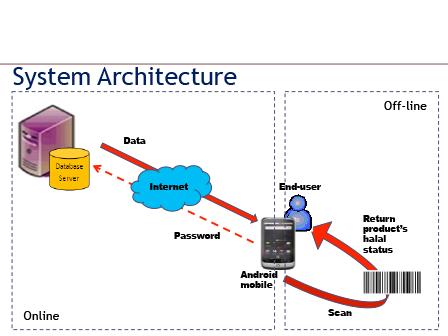 But what is keeping Dr Wan Azizun, Dr Shaiful and the other team members really excited about the app is the interest shown by Celcom, JAKIM and HDC, the Halal Industry Development Corporation that was set up under the Ministry of International Trade and Industry (MITI) to coordinate the development of the halal industry.

Dr Wan Azizun said from the initial discussions with the industry players, she and her team members were now working on additional features of the app where users only need to send a SMS (Short Messaging System) to find out the product’s halal status.

“MyHalal App is a simple and flexible concept that can be ported to any mobile platform other than Android, for example, like Apple iOS or Microsoft Windows Phone,” said Dr Shaiful.

He said they have put in the paperworks to patent and copyright their works and they are now looking at how their apps can function across borders.

Dr Shaiful  said he was thinking of how they could work with the foreign counterpart of JAKIM, like the Islamic Affairs Council of Singapore (MUIS) for incorporating Singapore Halal Product database into MyHalal app.

According to newspaper reports, Deputy Minister of International Trade and Industry Datuk Mukhriz Mahathir was quoted as saying that the Government had set an export of RM37 billion of halal products for 2012 as compared to RM35 billion for 2011.

The country’s halal industry, he said, was able to attract investments worth RM1.2 billion during the first 7 months of 2012.

Coupled with the fact that there are 2.1 Muslims across the globe, the potential for the halal industry is enormous.

What then could be the business potential of MyHalal App? – UPM